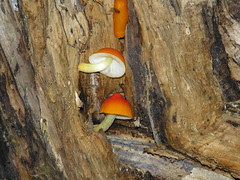 It is so cool to see mushrooms pop up. I missed an opportunity to take a picture of a fabulous mushroom the other day because when I found it I snatched it up and ran in the house to make a lewd joke to my wife. It was a stinkhorn (specifically phallus impudicus - wow!). 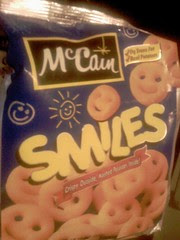 Used to have a good reputation, but the owners insisted on changing the recipe. Now they are often ignored on the plate, with diners focussing on the moose burger. 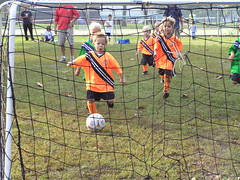 My 9 yr old captured this excellent behind the net shot of Alec (4.5) scoring his first goal.

Mallomar Migration
I had always been led to believe that due to the temperature sensitivity of the (real!) dark chocolate enrobement, mallomars could not be shipped outside of their east coast roosting grounds in the summer months. As the summer began and the store several miles from my house removed the tag from the shelf, I resigned myself to not seeing them again until fall. A week or so ago, though, I was at the store 2 blocks from my house, and saw them! Weird. I have mixed feelings about this. I like them, but I feel like it will make them less "special" since I can get them whenever I want. It's like the fact that I savor Jack-in-the-box tacos when I travel far more than the actual food deserves.
Posted by mikep at 12:40 PM No comments:

Come into my parlor
Sorry I can't edit my own videos- only the first half is in focus.
This was at the cabin we stayed at in Canada.