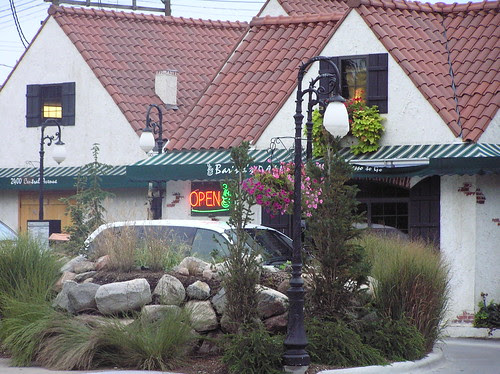 I visited the shop at 2400 Center St.
This is an amazing little oasis. The shop and drive through is imbedded in a nice garden with little waterfall fountains.
The espresso was top-notch, and the La Marzocco is behind the counter so you get to see the espresso pour very clearly.
My espresso was served in a Zoka cup, I believe they use Paladino. 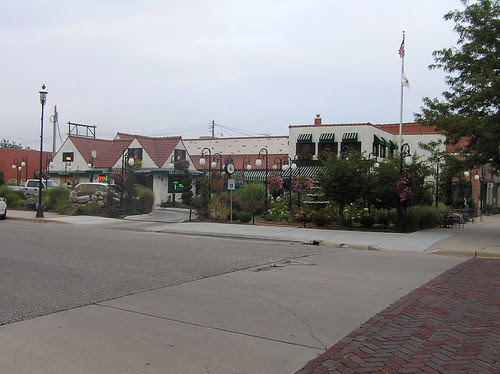 The baristas were friendly, and seemed happy to hear I knew of the shop because of Ryan Dennhardt's USBC participation.
Posted by mikep at 3:10 PM No comments:

Colorado coffee- the bad and the good.

I spent some time in Boulder and Winter Park. Boulder had many coffee shops, but I only had a chance to try a couple. The first place I tried had a beautiful Rancilio lever machine. I was pretty excited to try the espresso, but sadly my ‘double’ was like 5 oz and watery. I tried another place that had a nice ‘bar’ surrounding the machine, and the espresso was decent, but I really cringed when I saw the barista leveling off the coffee in the portafilter with the drippy spout over the doser. In Winter Park I found the shop of a local roaster. They also had a lever machine, and my double shot was big and watery. I could have guessed, as I browsed the roasted beans that had no roast date. 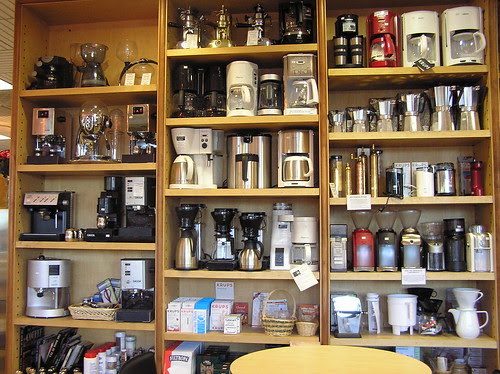 I was impressed with a place called the “Brewing Market” in Boulder. They had La Marzocco Swift grinders and a Linea. The barista was friendly, and while chatting found she had some mixed feelings about the Swift. I was really impressed by the assortment of equipment they had. I felt a bit sheepish snapping too many pictures, but you can get an idea of the variety they had on display. They also had a Pasquini Livia and grinder combination, and a bunch of hand grinders (No Zassenhaus, but they looked like quality grinders- Peugeot, I believe) 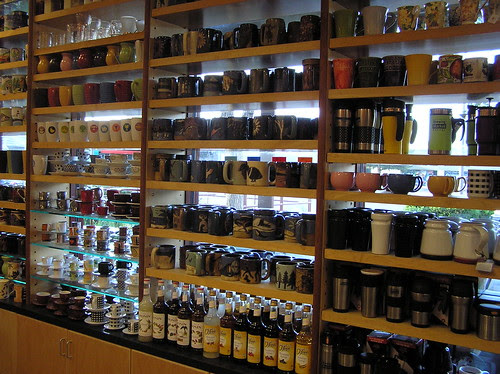 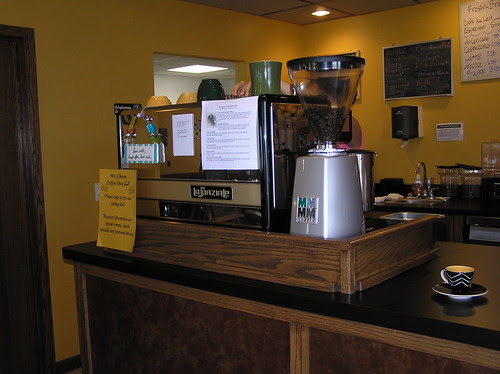 I had read the post on coffeegeek about this shop opening, and heard Ray (excitableboy) call the portafilter.net skypecast podcast talking about the shop. I decided I would try to stop in, and it happened to coincide with the time when my wife and I needed some coffee and a place for the kids to go to the bathroom. It was just a short drive off of 80 and very worth it! I had a very nice espresso. They use Intelligentsia Black Cat, and a shiny La Spaziale machine. They also use the "chicago chop" levelling method, and I got a nice, proper-sized double. The seating area is bright and comfortable, I wish I had time to sit and hang out, but we had a lot more road to cover. It was an early stop on our trip, but it would turn out to be some of the best coffee we would have while we were away. If you are passing through- please stop by and see Theresa (I believe that is the owner's name)- support someone doing things right in eastern Iowa. 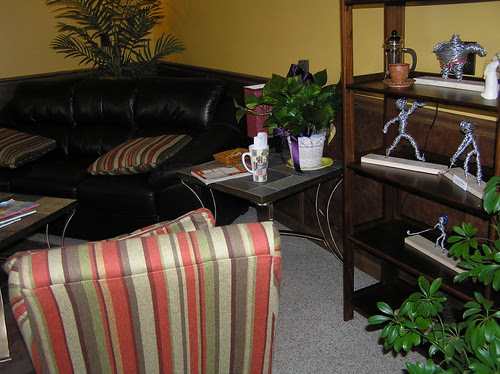