So I go to Intelligentsia, and order 4 shots of espresso in a 20oz cup of ice, and proceed to make a fantastic cheapskate latte….
No! Not really.
I had seen the "Horchata" beverage on the card at the register for a while (Goodrich Gevaart's sigbev). I really like the idea of barista comp signature beverages making it onto the menu, so I want to be supportive of the idea. Trouble is, the beauty of a straight up espresso made by a pro in a quality shop had always trumped my best intentions.
Today was different- it was just so hot out, I had to try this iced drink. (I was indeed a cheapskate in that I cashed in one of my punchcards for the drink, but I did try to tip well). It was really great- refreshing and sweet, without being too cloying or heavy. It is by nature a larger drink than Amber or Matt's, so I have to say I wasn't tasting the coffee as much as I was expecting, but I still highly recommend trying it while it is available.
Posted by mikep at 11:24 AM No comments: 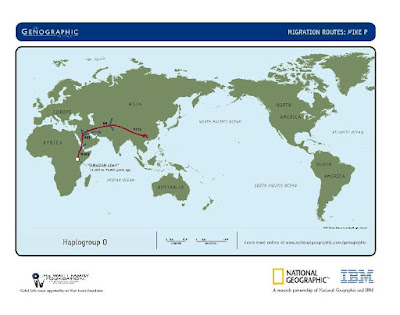 I recently had my cheek cells tested for the genographic project. My Y chromosome apparently carries marker M175 which puts me in Haplogroup O. I guess I share this marker with most men in China (my dad is from the Philippines). The thing that boggles my mind is that this marker (or any of the markers they find) trace back to one particular guy.

I have no intention of ever getting a tattoo, but I suppose if there was a good visual representation of the marker I would be good with that.
Posted by mikep at 1:51 PM No comments:

Vancouver!
(better late than never blog post)
I tagged along with my wife last month as she had a conference in Vancouver.
When we first got into town it was past my normal coffee drinking time, but I wanted to kill some time and it had been a day since I had espresso, so I wandered down to an Artigano near the hotel. I got a macchiato, which was quite good. The person at the cash register did verify I wanted the small cup drink (not the starbucks "macchiato"). I wonder if he had pegged me for being a Yankee? The last day in town I grabbed an espresso there (closest shop to my hotel) and snapped a pic: The next day was a busy one. I had gotten a tip from Lindsay that Vince Piccolo opens 49th Parallel on weekdays, so I wanted to make that my first stop. The space is really classy looking- I couldn't do it justice with pictures. I loved the ladder on a rail thing to access higher storage. Something about the chandelier and the rolling stones in the background just worked for me. I started with an espresso, then introduced myself to Vince as a visiting coffee enthusiast. He was very welcoming, and forced a fantastic solo macchiato on me! I had tried the epic espresso blend at home before (courtesy of Steve) and enjoyed it, and it was even better at the hands of pros.

I needed to continue on my espresso quest, so I headed out towards the Elysian Room. There was one woman on the whole street heading towards me, and just as she passed it registered- it was Lindsay on the street!That was very cool. At Elysian, I had an espresso. My favorite thing aboiut Elysian is that when you order espresso the first thing they do is pour a glass of water and hand it over. It is just a simple move, but it is both classy and practical. if you are going to cleanse your palate before the espresso, you need to get the water first. It reminded me of the best coffee place I visited in Venice.
Since this is Alistair's place I had to try some brewed coffee. I ordered a cup of their featured ethiopian coffee brewed on the clover. It had a remarkable floral tea quality, but i didn't drink much, I was starting to get jittery. I had to sit a while, stitch a bit on my footbags to get my bearings.
My next stop was Origins on Granville Island. I am ashamed to admit it took a while for me to find the place, that Granville Island is amzingly crowded and twisty, with cars and people meandering every way. I had been in contact with Drew by email and he was expecting me when I dropped in. He immediately started pulling shots on thier LM GB5 (paddle controls, WBC test machine). They had some of Stephen Morrisey's WBC blend, and I got to taste it. Next we had some of the Origins Espresso blend, both straight up and in a small milk drink (single capp, i believe). I really liked it. Through my impaiered tasting ability I still found it to be one of the most "balanced" espressos I've tried, by which I mean that there seeemded to be a wide variety of flavores in the cup, all acting in harmony. Drew was amazingly cool, taking the time to pull me some amazing shots, and really just chat about coffee stuff.

Wicked- so of course I leave the Chicago area for a little break, and I have to go seek out some Black Cat. Is that like trying to get Chicago style pizza in Boulder? I don't htink so . The shop has some really cool features- including the big table in the middle, which must force people to be somewhat sociable. For anti-social people watchers like myself, the big mirror at the shelf you sit at allows you to be a bit discrete when you are trying to see what people are up to. I got gas at the Hinsdale Shell Station yesterday. As I pulled out I saw the familliar "Intelligentsia" sign in the window.

I may need to rethink the term "gas station coffee"
Posted by mikep at 2:42 PM 2 comments: